A Shoe-In for Success 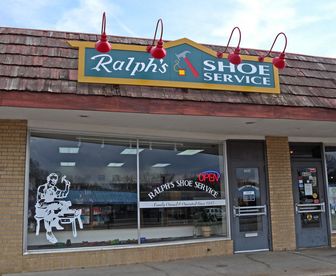 History is an important part of Ralph’s Shoe Service. The Richfield, Minnesota-based family-owned business has been passed down from generation to generation since opening its doors in 1947. Since 1956, the business had operated out of the Southdale Mall, where it was the first tenant of the country’s first indoor shopping mall. Through the years, Ralph’s moved around within the mall, but always had a thriving space in the building—until 2011, that is, when the business was suddenly forced out to make way for a new food court.

Haven’t heard of upcycling? The basic concept involves repurposing materials into something new and useful. A relatively new practice, upcycling has increased in recent years as people become more eco-conscious in their daily lives and realize that sometimes, one person’s trash really can be someone else’s treasure.

By reusing materials from Ralph’s original sign, Signs By Tomorrow-Richfield was able to celebrate the history of this family business while also helping promote environmentally-friendly practices – a win for everyone.

Out With the Old?

Owner Bill Roase, the grandson of founder Ralph Roase, and his family were disappointed to leave the location that had been so integral to their family’s business for 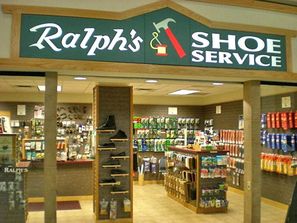 so many years. Still, the move was imminent, and Ralph’s Shoe Service made plans to develop their new location. As part of their move, Ralph’s obtained a quote to develop a lighted sign with modern graphics to adorn the exterior of the new shop.

It was at this point that the owners happened to meet Diane Sandstrom, owner of Signs By Tomorrow-Richfield, and asked her to review the quote. “The sign was going to cost him more than his budget could allow,” explains Diane. “This is where I came in.”

Diane also quickly realized the proposed sign would not meet local regulations because the City of Richfield didn’t allow backlit cabinet signage. Instead, Diane suggested a cost-effective alternative: moving the historic Southdale Mall sign to the new location and repurposing it with new lighting and framing.

“This sign was a part of their business that they were proud of,” says Diane. And the resulting sign is one that Diane is proud of, too. “We took four inch-by-four inch square steel posts, welded them to form the new frame, and routed a groove into the posts so that it could house the old panels,” explains Diane. “The panels were routed aluminum with a Lexan backing. Vinyl was applied to spool and scissors for color. All of this remained intact. We just created the frame.”

With the frame complete, Signs By Tomorrow added the finishing touch: red gooseneck lighting that established a classic-yet-whimsical look that is also highly functional. “We created housings within the top rail of the frame so the gooseneck lighting could screw into the frame and the wiring could travel through it to the electrical source,” says Diane. “This had to be done as the pitch on the fascia would not allow for the gooseneck lights to be mounted directly to it.”

In addition to the repurposed sign, Signs By Tomorrow-Richfield also created the vintage-looking shoemaker graphic on the new store’s window front.

According to Family Business Review Magazine, family businesses make up 80 percent of all business enterprises in North America, but the Family Business Institute says only about 30 percent of those survive beyond the first generation and just 12 percent make it to a third.

Embracing the Past, Present and Future

The resulting product not only saved the owners thousands of dollars but also allowed them to pay homage to their history, even moving them to tears when they first saw the newly installed sign. What at first seemed a crisis in fact turned into an amazing 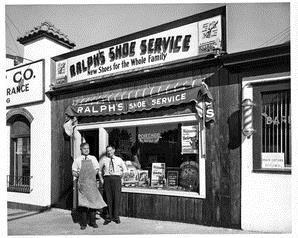 opportunity for the family business as they opened a store in the new location—and was an incredible experience for the Signs By Tomorrow team as well.

“This is the town where I grew up, and I have returned to help out a tradition in the community,” explains Diane. “We saved a customer money while preserving his tradition. I witnessed two generations of shoe repairman literally in tears when the sign was installed. All in all he was able to keep the tradition of the sign, the entire family was so happy, and they saved a few thousand dollars.”

Since the opening of the new location, business has been good for Ralph’s Shoe Service, offering hope that this new chapter in Ralph’s history will have a happy ending after all. “It's a great story,” says Diane. “It is one that I am proud of for so many reasons.”