Branded Materials Help New Product Stand Out in a Crowd

The goal of any product launch is to get customers to flock to your product. So when Flocked LLC had an opportunity to introduce their new product, a cosmetic holding spray, at a trade show, they went for it in a big way.

Says Carol Donnelly, licensed aesthetician and co-owner of Flocked, “We were totally on a time crunch because we had an opportunity that faced us and my partner Laura [Coody] and I decided to go for it.” Carol had a discussion with Becky Hargrave of Signs By Tomorrow (SBT) in Santa Clarita, California, and detailed the tremendous workload necessary to get everything done in time for the trade show.  “Becky never flinched, and it gave me the confidence to go back to my business partner and say, ‘Let’s go for it, let’s set the date, let’s pay for the booth, let’s move forward, and let’s launch this.’ We actually ended up launching it about four to six months earlier because of the strength of the whole branding campaign. It almost felt like it was meant to be.”

Going for the Unexpected

For Carol, finding a way to capture the essence of Flocked was the most important element in establishing a brand. Flocked branched off from Carol’s company, Dermal Solutions, Inc., and represents a departure for Carol. “I’m used to making and manufacturing skin care products for correcting skin, so this is the first time I’ve branched off and done something fun and fanciful, but still keeping with the genre of helping the skin.”

Carol had some ideas, but need a skilled designer to pull everything together to get a look that reflected a company like Flocked. “The one thing I really wanted to get across was it has to be fun because I’ve done such serious product in the past,” says Carol. “The name Flocked, it’s a little edgy. We wanted [the branding] to be edgy, but not dirty. Kind of naughty, but still nice.”

That’s where SBT came in. “Becky has been just like an angel in disguise,” says Carol.

Carol and the SBT team agreed that they wanted to stay away from the same old thing. Rather than put a picture of a woman spraying her face, they wanted to capture the spirit of Flocked. “We really needed to grab the audience and convey that it’s not just a spray, it really makes you feel incredible,” explains Carol. “It feels good going on, it smells good going on, it softens the skin, it helps to heal. We knew we were rolling the dice a little bit by going not so blatant. We really wanted to create a buzz and do it a little different than maybe the norm would be."

“We’ve had photo opportunities where they photograph certain booths at trade shows and ours is always on the docket because it’s so colorful.”
-Carol Donnelly, Co-owner, Flocked

The Challenge: Getting It Right…and On Time! 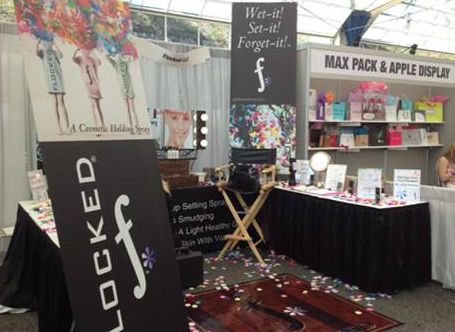 The SBT team had a lot to put together in a short period of time. Their to-do list included designing a logo, bottle label, box design, table throw, banners, floor graphic, business cards, flyers, a compact mirror, and vinyl lettering for a vanity mirror. SBT’s Becky and Carol had actually worked together in the past, but never on such a large all-encompassing project. “Becky was so calm, cool, and collected,” explains Carol. “I literally came in with the name and the concept and she never flinched from day one. There was not one drip of product in a bottle, I hadn’t a package, I hadn’t a box. All I had was the concept and what I had the booth looking like in my mind, and she helped me take that concept from literally nothing to what it is today.

The Response: Striking a Fun and Functional Balance

The result is a fresh, modern look in sophisticated black with colorful images that pop. The branded package is a cohesive product, right down to the strips of color on the business cards – those were pulled from the dynamic photograph of three women with heads erupting into a riot of color.

“The concept of the heads exploding off and the things all over the face, at first they are like that doesn’t tell what it does, but it really does,” explains Carol. “Colorful is a great word for this product because it not only does one thing, it does many things: it helps heal your skin, it helps to set your makeup, it give it a flawless finish.  The minute you spray it, it truly feels like a color explosion. It just has worked.”

“Our advertising going through Signs By Tomorrow has been..a learning experience because Becky took the time to explain things. She was so helpful in guiding us, not telling us, but just guiding us as to what to do.” 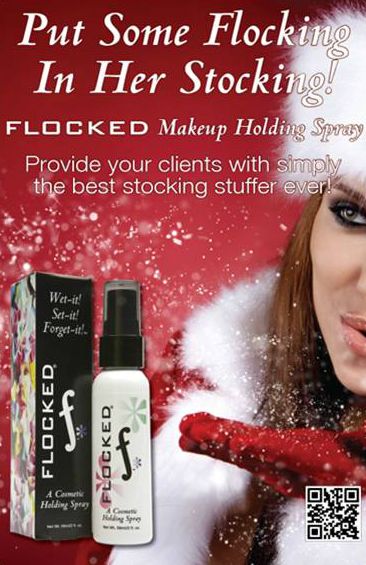 With Flocked being so well-received, Carol continues to turn to Becky and SBT for additional projects to support the rapidly-growing business. Since the initial round of projects, SBT has produced a new counter display and an array of additional advertising graphics including seasonal signage.

By providing continuity in design and being a responsive partner, SBT looks forward to the opportunity to work with Flocked as the business continues to evolve and grow.