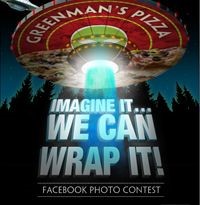 [Columbia, Maryland] April 19, 2012 —Custom Signage and graphics company Signs By Tomorrow announced today the winner of its nationwide “Imagine It…We Can WRAP It!” Facebook contest: the Believe In Tomorrow House at St. Casimir in Baltimore which will receive a free full-color custom graphic wrap valued at up to $3,500 as the grand prize.

While the final design is still evolving, regardless of the outcome Brian Morrison, founder and CEO of Believe In Tomorrow says he is thrilled about the opportunity winning this contest presents. “It is our hope that this wrap will draw greater attention to Believe In Tomorrow and the needs of critically ill children in Baltimore and around the country,” says Morrison.

According to Heather Davis, director of marketing for Signs By Tomorrow, the contest launched in February with the goal to challenge customers, friends and even total strangers to take the appeal of custom vehicle wraps and graphics to the next level. Contest entry was open to anyone in the U.S. who met the eligibility requirements and submitted a photo of what they wanted to see wrapped to the contest Facebook page.

In early March, custom signage and graphics company Signs By Tomorrow, in conjunction with sponsors 3M Commercial Graphics and UASG, selected five finalists from more than 100 entries then opened the voting up to the public to pick the winner. After tallying close to 1,000 votes, the “Believe in Beating Cancer” entry won, and will receive a full-color wrap and a full-day of installation labor courtesy of Signs By Tomorrow, 3M and UASG. Baltimore brand marketing firm Opus Media is donating design services to develop the graphic.

Installation is tentatively scheduled for the first week in May. For additional information, visit the Signs By Tomorrow website.

About Signs By Tomorrow Since it was founded in 1986, Signs By Tomorrow has been providing its customers with high-quality, cost-effective signs and graphics. With convenient locations, fast and friendly services and affordable prices, the company has grown into a national network of 150 locations in 35 states. Known as an industry leader in technology, Signs By Tomorrow carries a commitment to innovation that ensures that each store is equipped with state-of-the-art sign-making printers. For more information, visit www.signsbytomorrow.com.