Pennsylvania Signs By Tomorrow Franchisee Named “Best of the Best” 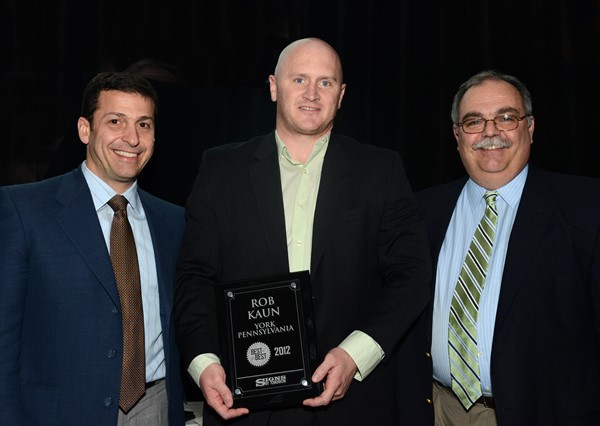 York, Pennsylvania February 28, 2013 – Leading signage and graphics company Signs By Tomorrow announced at its national convention in Savannah, Georgia earlier this month that Rob Kaun, owner of Signs By Tomorrow of York, PA, won its annual Best of the Best Award.

Signs By Tomorrow of York was opened by the Kaun family and produced its first sign in 1986. In 1995, Kaun took over as the owner of Signs By Tomorrow of York to continue his family’s business. Kaun says he was chosen for this award because of his center’s growth in sales in 2012, customer satisfaction and commitment of his employees. According to Kaun, in order to take the center to the next level he hired outside salespeople to focus solely on sales and a dedicated in-house sales and marketing coordinator to ensure a high level of customer service and outreach.

“I am honored to have won the Best of the Best Award. However, I could not have received this award without the dedication and teamwork of my staff. I am truly appreciative of their hard work over the last several years,” says Kaun. “Without their commitment to our team we would have not reached the next level in growth in sales and been able to provide our customers an exceptional experience.”

Kaun plans to build on his success by adding another outside salesperson and developing even better communications processes to enhance the center’s customer service.

For more details about Signs By Tomorrow of York, please visit www.signsbytomorrow.com/york.