Putting Their Best Paw Forward: A "Tail" of Expansion and Growth

Putting Their Best Paw Forward: A "Tail" of Expansion and Growth

When an established company makes the decision to expand into new market channels, it is not an overnight endeavor. It requires not only careful planning, but the ability to be flexible as new challenges and opportunities pop up.

Signs By Tomorrow of Brighton, MI (SBT) recently had an opportunity to be a part of this process for one of its clients, a large pet supply chain. “Currently, the pet supply store is going through a rebranding period and upgrading,” explains SBT Brighton owner John Nagel. “For years, they have been known as a hometown pet food supply chain that sold only products. Recently, they decided to add services to their mix, in particular, pet grooming.”

Starting Off on the Right Paw

The relationship between the two businesses began when a local promotional products company recommended SBT to the pet supply company to produce a pop-up trade show display banner. After turning around a 10-foot pop-up display (pictured above) in 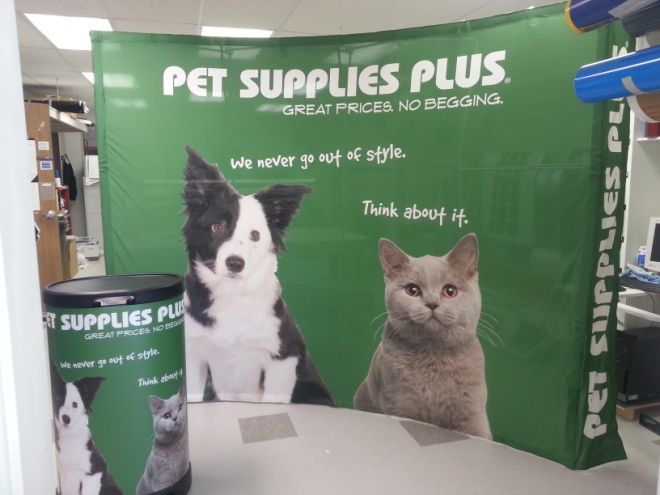 just four days to meet the client’s deadline, John delivered the display to them in person and demonstrated how to set up and break down the display. The relationship blossomed from there.

As the pet store company, which currently has 125 franchise locations, continues to experience significant growth, SBT has since provided support for new store openings. To date, Signs By Tomorrow has created 12 16-foot feather banners for two new store openings and is developing three more grand opening kits for interior signage.

Working with the marketing director, the franchise sales and development director and the construction management department, the relationship between the two companies has proved successful, leading the client to turn to Signs By Tomorrow once again when they decided to shift their focus from strictly supplies to services such as grooming.

The addition of a pet grooming service was a strategic move on the part of the pet supply company, intended to attract animal-lovers who want to keep their pets well-groomed. This evolution has literally changed the face of the business, as the new grooming areas are located in the front of the stores so that customers can see the pets being groomed through the front window.

As with any new venture, however, this one posed its challenges, one of which was light through the windows which was disturbing the pets and negatively impacting the groomers’ vision.

“They first came to SBT with the idea for blinds with graphics,” says John. “However, after researching the cost and time to navigate the different requirements of advertising on windows in dozens of different municipalities, they opted to go with four-foot-wide retractable banner stands which could serve as advertising as well as blocking light.”

62% of US households own a pet, and people spend $53 billion on pets annually, according to the American Pet Products Association (APPA).

While everyone liked the idea of the banners, it was critical to incorporate them in a way that would work with the unique environmental considerations inherent in a pet-grooming area. In particular, the SBT team worried whether the banner stands, which the client originally wanted with canvas graphics, would stand up to the stress of the environment--a busy space with animals, fur, water, and soap.

Still, the client was interested in trying the pop-up banner stands. Signs By Tomorrow steered the client away from canvas, instead urging them to use more durable materials that could stand up to the elements for a longer-term solution.

Additionally, SBT recommended a trial period to test the banners in store. Currently, the pop-up banners are being implemented in six stores for a three-month trial period. The playful, two-tone banners, complete with whimsical pet illustrations and engaging sayings, are doing the job. Simple and user-friendly, the banners work on multiple levels, serving as both sun screen and advertising.

The client is extremely happy with not only the quality of the banners, but the process of getting them created. And now, time will tell. Once the trial period is over, the pet supply company and Signs By Tomorrow will evaluate whether or not the banners work for this evolving company, and no doubt the result will be pretty doggone successful.