Signs By Tomorrow - Rockville featured in Signs of the Times Magazine. 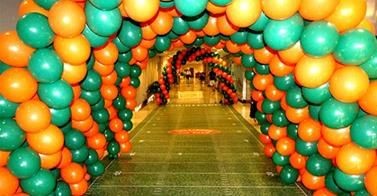 When Lamar Hunt, the late owner of the Kansas City Chiefs, reportedly coined the term Super Bowl to identify the inaugural NFL vs. AFL championship game in 1967 (the topic is up for debate), he couldn’t have imagined the pop-culture behemoth it would become. For the inaugural matchup between the Green Bay Packers and Kansas City Chiefs, a 30-second ad during the game’s telecast cost an average of $40,000; for Super Bowl XLVIII, the pricetag has increased approximately 100-fold. People who don’t know a football from a meatball tune in to watch big-budget, star-laden commercials and halftime wardrobe malfunctions. Analysis of the quality of these advertisements now seemingly outweighs the postmortems of what happened during the game. As with an event that’s a guaranteed moneymaker, corporations line up to serve as sponsors and proudly attach their name to the spectacle. In its role as the “official hotel sponsor of the NFL,” Marriott and its 900-location brand Courtyard by Marriott emphasized its role with the big game to its internal “guests” – employees at its Bethesda, MD headquarters – with an array of printed vinyl and fabric graphics installed at its entrance and lobby.
Signs by Tomorrow’s Rockville, MD franchise, which Mary Lou Goehrung has owned for 22 years, undertook the job. She noted that the shop has worked with Marriott for approximately 20 years. The project includes: • A 52-ft.-long, 572-sq.-ft., vinyl floor graphic of a miniature football field, which includes yard lines, hash marks and “Courtyard” printed in both end zones. Signs by Tomorrow printed the job on its HP Designjet L26500 latex-ink printer with MACtac’s IMAGin 5828Rfloor-graphic media. Mactac’s PermaFlex 6554 textured, pebble-finish overlaminate keeps the playing field green (all floor graphics were fabricated with the same media and topcoat);  • Three, heavy-knit-fabric backdrops – the longest of which spans 83 ft. long – feature NYC skyline images and depict a stadium’s filled bleachers. The graphics were printed on the shop’s HP Scitex LX 850 latex-ink printer with Aberdeen 8100 heavy-knit fabric; • Inkjet-printed cutouts that feature the Statue of Liberty, Brooklyn Bridge and other NYC icons; • Throughout the building, 27, 10-ft.-long sections of football-shaped “footprints” were installed on the floor with a pebble-finish overlaminate that provides texture; • Ten, 3.5-ft.-tall, repositionable-vinyl decals were installed on the building’s elevator doors; • And, a 19-ft.-wide banner, printed on the DeisgnJet with 13-oz. material, was installed over the headquarters’ employee entrance to announce the building’s decoration to staff.